Given the exceptionality of the required period, exceptional measures as well gain space in the public debate. Political leaders around the world propose different models of public policies and positions that clash with each other. In Brazil, amid the confinement, deliberations and manifestations of the occupants of elective positions and parties are emerging online, either through social networks or live.

In this pandemic context, it is even more important to observe the principles of transparency and access to public information in decision-making. In an attempt to facilitate the expansion of public debate and promote greater knowledge about parliamentary agendas, the Brazilian Association of Investigative Journalism (Abraji) and Transparência Partidária [Party Transparency] structured a mapping of the manifestations and proposals of political parties on measures related to the pandemic, based on its posts on Facebook.

The analysis measured the Facebook publications of the 33 political parties registered with the Tribunal Superior Eleitoral and Aliança pelo Brasil [Superior Electoral Court and the Alliance for Brazil] - an organization that President Jair Bolsonaro is trying to formalize in the Electoral Justice. The data correspond to the publications found between 24.Jan.2020 and 19.Apr.2020 and comprise 146 themes or proposals. In total, 2,120 posts were found about COVID-19.

The manifestations and proposals on COVID-19 with added party support were i) social isolation policy, ii) mass testing, iii) emergency basic income, iv) taxation of large fortunes, v) against MP 936/2020, which allows a reduction in salaries, and vi) removal of the President of the Republic. 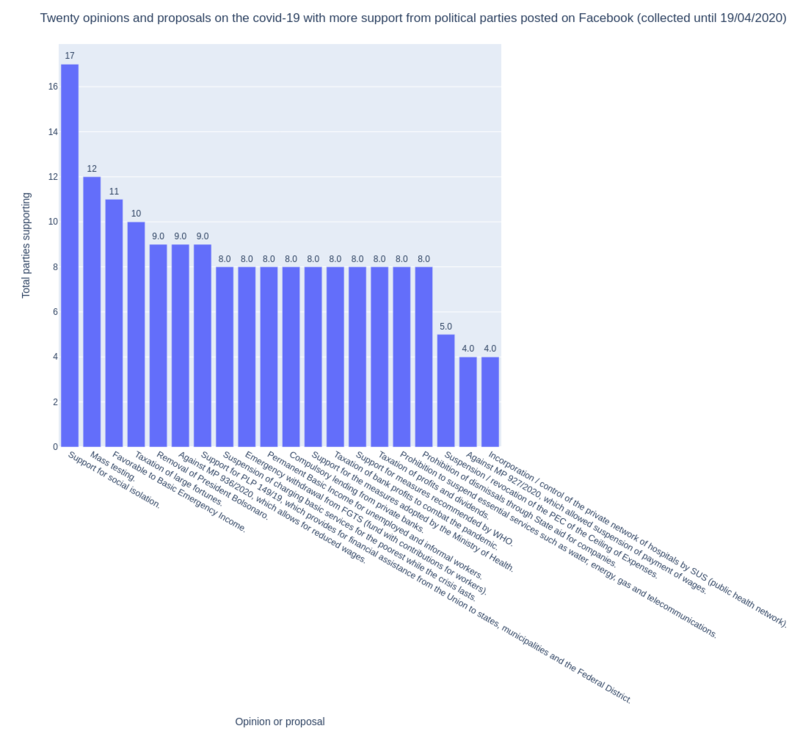 The parties that most manifested or presented proposals about the new coronavirus pandemic in the surveyed interval were PSOL (39) and PSB (34). The parties, however, more active on the social network in the analyzed period, that is, who made more publications on various topics, were PCdoB (499 posts), Podemos (268), PSL (145), PSDB (134) and Novo (115), but just one of them - PCdoB - figures among the 5 parties with the most manifestations and proposals related to the coronavirus. Postings with non-judgmental news reproductions or demonstrations of a purely informative nature on pandemic prevention measures were not considered. Texts on measures adopted by the federal, state or municipal governments were also left out.

Some political parties have not made a statement on the matter. They are PRTB, PTC, Patriota, PL, PMN and Christian Democracy.

Aliança pelo Brasil [Alliance for Brazil], a political organization that President Bolsonaro intends to formalize as a party, also did not comment on proposals and policies related to the COVID-19. The organization's only post on the crisis was made on February 10 in the following terms: “We are vaccinated. #caronavirus #AliancapeloBrasil”, which features an image that reads “CARONA VIRUS NEVER AGAIN!! WE ARE VACCINATED !!”. It is important to note that the image says the Carona virus and not Coronavirus.

In addition to the Alliance for Brazil, the PTB also disseminated misinformation about the crisis, whose national president, Roberto Jefferson Monteiro Francisco, said: "If the Chinese flu brings Bolsonaro down, the socialist pandemic will infect Latin America." This was also the only party that expressed support for President Jair Bolsonaro during the public health crisis in the analyzed period.

Regarding the public policies that had the greatest resonance among the parties was the policy of social isolation, mass testing, support of emergency basic income and the taxation of large fortunes, manifestations contrary to MP 936/2020, which allows for a reduction in wages, and the defence of the removal of the President of the Republic.

Other positions that also stood out among the parties were the measures adopted by the Ministry of Health and WHO recommendations. In both cases, 8 parties expressed support for these policies.

Regarding the transparency of data on the pandemic, only PSTU and Rede were in defense of this measure.

Regarding the amendments to the Access to Information Law proposed by the President of the Republic, only the PSL, former party of Jair Bolsonaro, expressed itself on social networks, opposing the measure.

How the job was done and how to get the data

The proposal to monitor social networks, according to the executive director of Transparência Partidária, lawyer and political scientist Marcelo Issa, is important in the current context of Brazilian politics, because several political players and parties have adopted the massive use of social networks as a tool for communication, political campaign, the debate of ideas, attacks against people and institutions, among other uses.

Besides, it is important to highlight that Facebook is the most used social network to present ideas and proposals in more detail. Thus, collecting all the posts from this social network and classifying them according to pre-defined methodology is one of the most efficient ways to understand the addresses and objectives of political parties.

All 34 Facebook addresses of Brazilian parties were gathered, including that of the Aliança pelo Brasil, to begin a specific study of COVID-19 posts. The team's biggest challenge was to find a way to gather this information since the parties' set of posts is made up of thousands of texts and images. Abraji's project coordinator, Reinaldo Chaves, and legal assistant, Juliana Fonteles, created monitoring in Python, a free and open-source programming language, to collect all posts.

Then, the texts of the posts were transformed into data frames (two-dimensional data structure created by Python) that allows the search for words. The terms 'CORONAVÍRUS', 'CORONAVIRUS', 'CORONA', 'CORONA VIRUS', 'CORONA VÍRUS', 'EPIDEMIA', 'PANDEMIA', 'COVID19', 'COVID 19', 'COVID', 'VIRUS' , 'VÍRUS' and 'COVID-19' were searched, to arrive at a final data set of posts about the pandemic.

This was transformed into a spreadsheet file for the classification of statistics and subject. The project proposes to find out what are the positions and proposals of the Brazilian political parties on the COVID-19 pandemic.

The methodology does not consider posts with reproductions of news without value judgment or manifestations of a purely informative character about measures to prevent the pandemic. Texts on measures adopted by the federal, state or municipal governments, polls or questions to users, opinion articles, legislative proposals or positions presented by parliamentarians and other representatives were also left out, except when authored by the national presidents of the parties or their seats in the National Congress. Publications with the same content were registered only once.

These files will be updated weekly in the shared folder. And the Python script that captures the posts on Facebook, filters the texts on COVID-19 and creates the charts of this text can be seen on this link in Github.